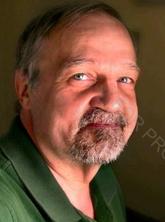 Michael Plunkett has been working as a photo journalist since the late 1970s, beginning his career at the Trenton (NJ) Times, the Associated Press (AP) and the United Press International (UPI) wire services. He is currently working for the Philadelphia Inquirer as a photo editor.
Influenced by all good photographs and photographers, Plunkett names Americans W. Eugene Smith and Walker Evans, as well as  Brazilian documentary photographer Sebastiao Salgado and Czech photographer Josef Koudelka as the major influences in his work. ìIt is hard to live in a vacuum and not include a hint of them in any photograph I take, even if it isn't instantly apparent", Plunkett said.
Full biography, photographs and additional information available in "Artists Gone Global 2011" book. 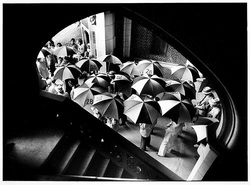 When Plunkett entered his black and white photo "P-rade Reunion" in the  art-show, immediately you observed every part of  this winning photo as if there were a direction equal to that of traffic with a flow.  From the  focal point, viewers' eyes are naturally drawn to the umbrellas.  Assuming a clockwise noon to nine visual scan following the top of the black spandrel above the arched column and back down to the lower steps and balustrade, up to the top landing and decending for another moment ...to the parade of an organised group walking out of the halls into the light where  onlookers are just as fascinated.